Pack this soft and chewy bar slice as an on-the-go snack.

Method:
1. Preheat oven to 180°C.
2. In a small mixing bowl place chia seeds and water, stir and sit aside until
the chia seeds have soaked up all the water.
3. Place the coconut oil, and maple syrup in a small saucepan over low heat
and cook, stirring, for 3-4 minutes or until melted and combined.
4. Pour coconut oil and maple syrup mixture into a large mixing bowl and
add the dried cranberries, sultanas, vanilla paste, BARLEYmax™ flakes,
pepita seeds, silvered almonds, chopped walnuts, shredded coconut,
sesame seeds, cinnamon and chia seeds and mix well to combine.
5. Spoon into a lightly greased slice tin (approximately 20 x 30cm) lined with
non-stick baking paper. Flatten the mixture using the back of a spoon.
Bake until golden, approximately 30-45minutes.
6. Set aside to cool. Cool completely in the fridge before cutting into bars to
serve. Store in an airtight container or in the fridge for up to 1 week. 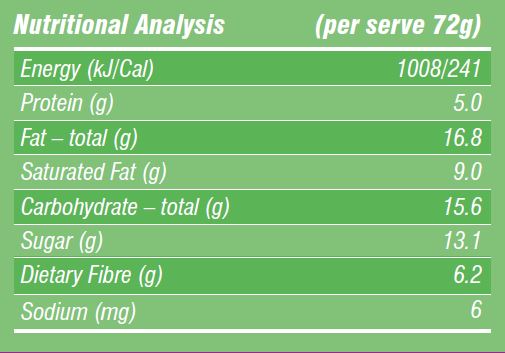 This delicious smoothie is a good source of fibre. It’s a great